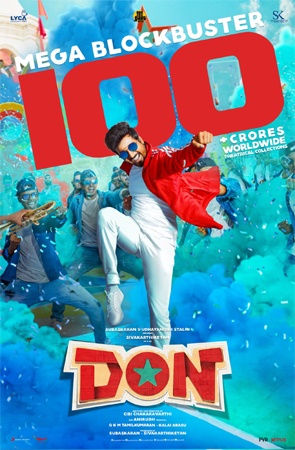 Young and talented Kollywood actor Sivakarthikeyan is on a success spree. His latest movie, Don, which was released a couple of weeks ago has become a big hit at the box office.

The latest news is that the movie has joined the Rs. 100 crores club in just 12 days. This is one of the small films that made huge money at the ticket windows in recent times. Despite low promotions, the movie’s Telugu version is also running well in AP and TS.

Priyanka Mohan played the love interest of Sivakarthikeyan in his comedy drama, which also has SJ Suryah in a key role. Directed by Cibi Chakravarthi and produced by Lyca Productions and Sivakarthikeyan Productions, the movie has Anirudh’s music.