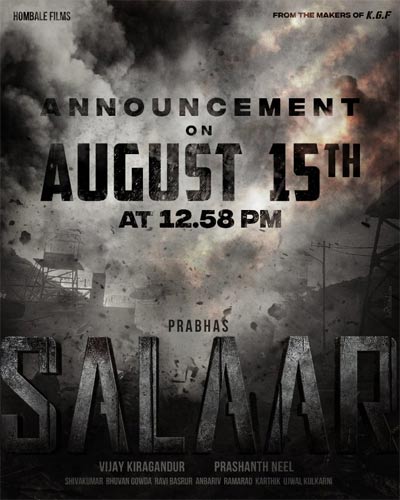 Ardent fans of pan-India star Prabhas are eagerly waiting for the update of Salaar. The makers of the movie have already announced that a mega update will be out today at 12:58 PM.

Fans have huge expectations on the update. Some people are expecting that the team Salaar will announce the sequel plans while some other fans are saying that the release date of the teaser will be announced.

Few others are in a strong belief that the update is about Prithviraj Sukumaran, who earlier confirmed that he is a part of the biggie. However, the suspense will be revealed in a few hours.

Sruthi Haasan roped in to play the lady love of Prabhas. Jagapathi Babu will also appear in a pivotal role. Directed by Prashanth Neel of KGF fame, the multilingual movie will have the music of Ravi Basrur. More details of the film will be revealed in the coming days.