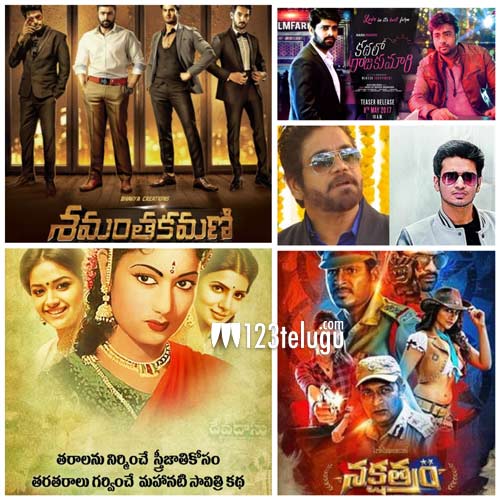 Multi-starrers have always been the audience favorite right from the Misamma to Krishnarjunulu to Aswamedham to Seethamma Vaakitlo Sirimalle Chettu to Manam. More often than not audience go to theaters to watch a star. And if on the same ticket, they get to see more than one star, that happiness knows no bounds. But the multi-starrers happening now are the totally unexpected crazy combinations.

One of the such multi starrers that is on the cards right now is Samanthakamani directed by Sriram Aditya of Bhale Manchi Roju fame. It has not one but 4 stars in the movie, Nara Rohit, Sundeep Kishan, Sudheer Babu and Aadhi. The veteran star Rajendra Prasad is also playing a prominent role. The motion poster released with dialogues of all four heroes and the subsequent poster releases of each hero were all intriguing. The latest teaser released today will surely raise the expectations.

Krishna Vamsi’s Nakshatram has been in the news owing to its craziest combination of the actors. Sundeep Kishan playing the main lead while Tanish for the first time playing a negative role and Regina and Pragya Jaiswal playing female leads. Since it is Krishna Vamsi movie, one can expect the female leads to have equally prominent and at times more than equal roles. The movie also has JD Chakravarthy, Krishna Vamsi’s favorite Prakash Raj and Shriya in a guest role. The icing on the cake is Sai Dharam Tej’s role that started as a cameo but now extended to almost a full-fledged role. One can easily say that all eyes are on this movie right now.

The next one in line is being helmed by Chandoo Mondeti of Karthikeya and Premam (Telugu) fame. He managed to pull the right strings and make both Nagarjuna and Nikhil accept a movie together. Everyone knows Nagarjuna picks up niche subjects and also has a good eye for commerciality. Coming to Nikhil one can clearly say that he is turning out to be Nagarjuna of this generation encouraging many new comers and working on novel subjects. One can surely expect a mind-blowing subject if they both gave their nod to it.

Post Jyo Achyuthananda Nara Rohit and Naga Shourya are coming together for Kathalo Rajakumari. The trailer has the usual Nara Rohit brand novelty to it along with a nice thriller feel. This one surely looked like another winner for both Rohit and Shourya.

Last and the most important multi-starrer on the cards is Samantha and Keerthy Suresh starrer Mahanati. This movie is touted as another jewel in the crown of Telugu cinema. For uninitiated this is a biopic of Mahanati Savitri. This one is directed by Yevade Subramanyam fame Nag Ashwin. There was also a news that Dulquer Salmaan too is playing a role in this movie.

Wishing success to all these crazy multi-starrer combinations and wishing many more to come.