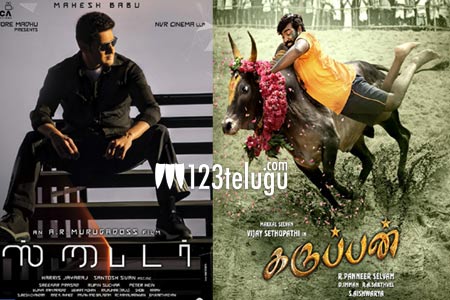 Until recently, the Tamil version of Superstar Mahesh Babu’s upcoming action thriller, Spyder, was facing a major competition from rising Tamil star Sivakarthikeyan’s Velaikkaran. Velaikkaran, which was supposed to release on September 29, has been postponed to December, leaving the ground empty for Spyder.

But in an unexpected move, the makers of acclaimed Tamil star Vijay Sethupathi’s Karuppan have announced that the film is going to hit the screens on September 29, a couple of days after Spyder’s release. Vijay Sethupathi has been in a terrific form with the back-to-back successes of Vikram Vedha and Kavan, and he may give an intense competition to Mahesh this Dasara season.