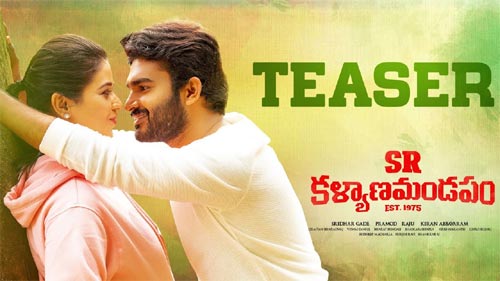 Kiran Abbavaram is a very talented hero and this was proved with his debut film Raja Varu Ran Garu. He is now back with a romantic fun drama called SR Kalyanamandapam. The songs of this film have already become good hits and today, the makers revealed the teaser.

The teaser showcases Kiran Abbavaram as a very active student, lover, and man who fights for SR Kalyanmandapam. Kiran, who was mostly subdued in his first film has a good screen presence, good comedy timing as well in this film. His body language and confidence levels look good.

The village visuals, Priyanka Jawalkar as the heroine, native comedy, and Sai Kumar’s role, everything looks perfect in the teaser which has some good visuals and BGM.

Based on the story of a Kalyanamandapam, this film is directed by Sridhar Gade. The music of the film is by Chaitan Bhardwaj. For now, the teaser is filled with good elements and we need to see how the film will come out.