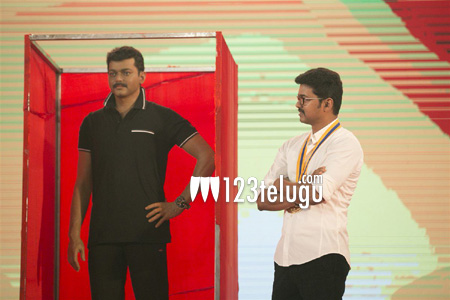 After the likes of Amitabh Bachchan, Shah Rukh Khan and Prabhas, yet another star hero is all set to get his wax statue installed at a museum. Star Tamil hero Ilayathalapathy Vijay today unveiled his wax statue during the Behindwoods Gold Medals event in Chennai.

The wax statue will be installed at the Lonavala Celebrity Wax Museum. Apparently, Vijay had catered an hour for the museum’s team to take his measurements.

Vijay was honored with the title ‘Samrat of South Indian Box-Office’ after he won a People’s Choice poll with over 66% of the votes. The poll was conducted by Behindwoods.