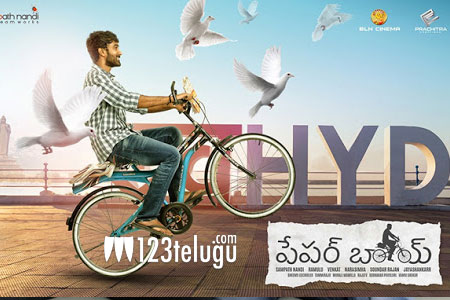 Santosh Shoban, Riya Suman starrer Paper Boy is gearing up for its wide release later this month, and the buzz surrounding the film is slowly picking up. Written and produced by Sampath Nandi, the film has been directed by V Jayshankar.

Incidentally, the film got a major boost on the internet when Superstar Mahesh Babu himself praised the trailer saying that it is extremely fresh and pleasant. It is worth noting that Mahesh Babu had acted in Bobby way back in 2002 and it was directed by Santosh’s father, Shoban.

Not surprisingly, the whole team of Paper Boy was thrilled with Superstar’s support for this film which revolves around a young couple. Tanya Hope has played a crucial role in this romantic drama.

Watched the trailer of #Paperboy. Looks extremely fresh & pleasant 🙂 On a personal note, it is even more heartwarming for me, having worked with his father the Late Shoban garu. Truly wishing #SantoshShoban & his team the best for its release. 👍👍 https://t.co/2IAak2HUky