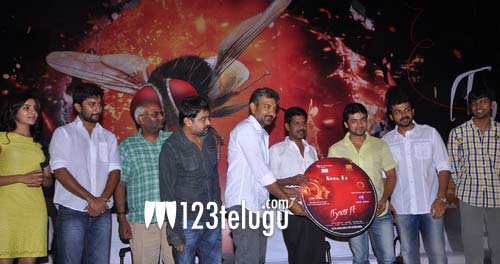 The audio launch of SS Rajamouli’s upcoming film Eega was a star studded affair in Hyderabad recently. When the team went to Chennai for the audio launch of Naan Ee, the Tamil version of Eega, the buzz was equally good. Two of the top heroes in Kollywood, Suriya and Karthi attended the event along with ace directors Bala, Lingusamy, Samuthirakani and actor Parthepan. The guests present at the audio launch praised Rajamouli and we hear that the guests couldn’t stop raving about the film’s trailer.

Nani and Samantha also attended the audio launch along with S S Rajamouli. This Rajamouli’s debut film in Tamil, although his earlier film Magadheera was dubbed in Tamil as Maaveeran. Prasad V Potluri has produced the Tamil version and it also stars Santhanam in a crucial role. Crazy Mohan has written the dialogues in Tamil and M M Keeravani has composed the music. The bilingual film will hit the screens later this summer.