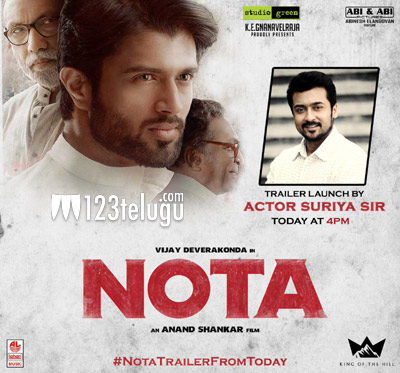 It’s well known that the theatrical trailer for Vijay Deverakonda’s upcoming political thriller, NOTA, will be released this evening at 4:00 pm. A sneak peek of the trailer was released yesterday and it raised curiosity about the film.

According to the latest updates, Tamil star Suriya will be launching NOTA’s trailer this evening. Incidentally, Vijay released the trailer for Suriya’s recent home production, Chinna Babu, which had his brother Karthi as the hero.

NOTA has Mehreen Pirzada is the female lead in the movie. Veteran Tamil actors Nasser and Sathyaraj essay crucial roles in the film. Anand Shankar is the director and Studio Green’s Gnanavel Raja is the producer.