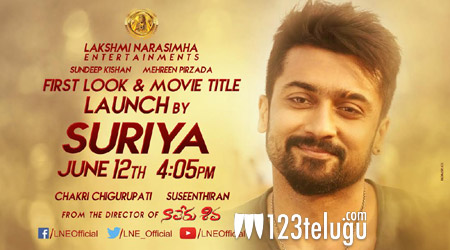 Suriya is going to unveil the first look of Sundeep Kishan’s bilingual film in Suseenthiran’s direction. The film has Sundeep Kishan and Mehreen in lead roles and it was shot quite extensively earlier this year in Andhra Pradesh and Tamil Nadu.

Suriya will also reveal the title of the film, along with its first look, on June 12. Chakri Chigurupati has produced the film under Lakshmi Narasimha Entertainments banner. The film will also mark Mehreen’s foray into Tamil cinema and it’s the first time that Suseenthiran has paired up with these two young talents.

Currently, Sundeep Kishan is in London where he’s shooting for his next Telugu rom-com with Tamannaah in Kunal Kohli’s direction.