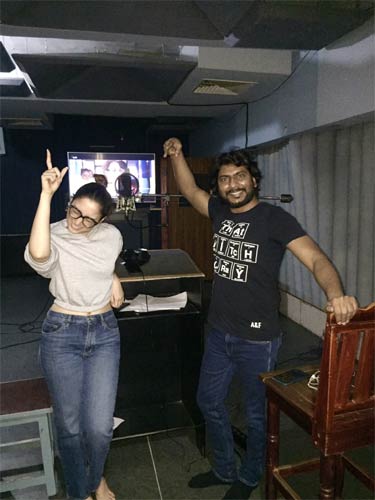 It’s well known that star heroine Tamannaah will be seen as the coach of Telangana women’s kabaddi team in in the Gopichand-starrer sports drama, Seetimaarr. The film is being helmed by Tamannaah’s Racha director Sampath Nandi.

This evening, Sampath took to Twitter and tweeted a picture of him and Tamannaah in a dubbing studio. “Dubbing in Telugu, moreover, Telangana accent. Tamannaah nails it and how. Breathing life into every cell of Jwala Reddy. Kudos to her efforts,” Sampath tweeted.

Seetimaarr is being bankrolled by Srinivasa Chitturi. The film is scheduled for release on April 2nd. The film’s teaser and the songs have created a decent buzz.

Dubbing in Telugu, moreover, Telangana accent..@tamannaahspeaks nails it and how!