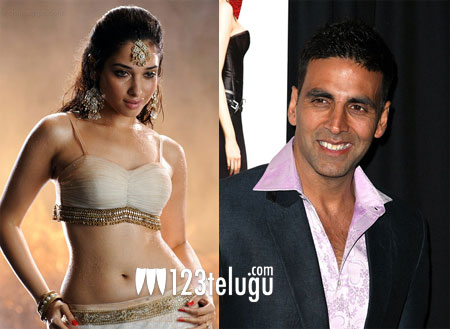 Tamannaah might have bagged her second big project in Bollywood, if the latest rumours are to be believed. She’s currently acting in the remake of Himmatwala which has Ajay Devagan in lead role. The latest buzz is that she’s going to romance Akshay Kumar in an upcoming Hindi film, which is a remake of the Tamil film Ramana. Jayam Raja is going to direct this remake and the film will go on floors early next year. Incidenatally, Ramana, which released in 2002, was later remade in Telugu as Tagore and Chiranjeevi, Shriya Saran and Jyothika had played the lead roles. Now, Akshay Kumar is going to reprise Chiranjeevi’s role in the Hindi version. Last year, there was a buzz that Aamir Khan was interested to star in the Hindi remake. Ever since Anna Hazare launched the anti-corruption movement, there has been buzz about remaking Ramana in Hindi since the protagonist in the film also fights against corruption.