Tamannaah teams up with Vijay Sethupathi for a special shoot!
Published on Jun 27, 2021 6:33 pm IST 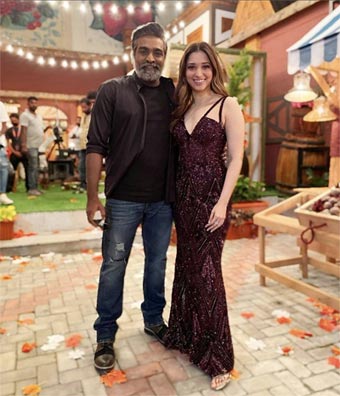 Vijay Sethupathi and Tamannaah are two of the most popular South Indian actors, and both of them are all set to make a big splash on TV soon. While Tamannaah has been roped in as the host of Master Chef Telugu, which will be aired on Gemini TV, Vijay Sethupathi will be hosting the Tamil version of the show for Sun TV.

There’s plenty of anticipation surrounding the show since its international versions are hugely popular with viewers. Endemol Shine Group, which has been the driving force behind shows like Bigg Boss, is creating this show for Telugu and Tamil audiences. And it’ll be quite interesting to see how Tamannaah and Vijay Sethupathi bring their own style to the show.

Recently, both Tamannaah and Vijay Sethupathi shot for a promo for their shows, and they are going to be aired soon. Revealing their respective looks from the promo shoot, Tamannaah took to Instagram to share her joy of working alongside Vijay Sethupathi. In the past, the duo had teamed up in Dharma Durai, and they were also part of Sye Raa Narasimha Reddy.