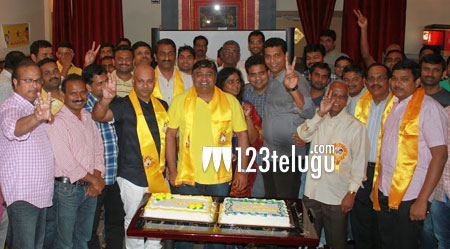 The banquet hall was well decorated and adorned with NTR’s and Chandrababu Naidu’s pictures made the hall so vibrant and lively. The event started off with an amazing documentary ‘Sarileru Neekevvaru’ on the life history of TDP Founder, Legend Late NTR, later followed by another nice documentary on current TDP President, Mr. Chandra Babu Naidu.

In his introductory speech, Mr. Ravi Potluri remembered the signification of Telugu Desam Party Formation and briefed achievements of Telugu Desam Party in the past 32 years under NTR and CBN’ leadership. Also thanked Hero Pawan Kalyan for supporting TDP and Chandrababu Naidu. TAGDV General Secretary & Nandamuri Fan Mr. Sambaiah Kotapati recollected the memories of NTR and the revolutionary changes implemented by TDP and bringing enormous recognition to Telugu People across the globe and urged the NRIs to continue their support to TDP. People from various fields of the society talked about their experiences with the Legend NTR and shared their fond memories with the audience. Around 150 Nandamuri Fans & Telugu Desam Party sympathizers attended the event and made it a grand success.

BRING BABU BACK (BBB) is a social media campaign which significantly helped to create awareness in common public to bring Chandrababu Naidu and Telugu Desam party back in to power, BBB volunteers used this platform to issue a fervent appeals to the millions of Chandrababu fans who are not members of the Telugu Desam Party, thousands of volunteers contributed by canvassing from door to door, contributing on social media platforms like Facebook & Twitter, made videos to showcase the great work done during Chandrababu’s tenure and the history will remember BRING BABU BACK as one of the most electrifying positive campaign.

Philadlephia TDP fans paid rich tributes to TDP Leaders Mr. Paritala Ravi, Mr. Errnannaidu and Mr. Laljohn Basha. Attendees remembered their services to the TDP and observed silence for a minute, all audience standing, as a mark of respect to the memory of departed souls. Philadelphia TDP fans also paid rich tributes to the Telangana martyrs who sacrificed their lives for the sake of Telangana. Mr. Ravi Mandalapu (Otis IT Inc) announced 5000$ donation towards AP State Capital construction Fund.