Teaser of Suriya’s Etharkkum Thunindhavan to be out on this date
Published on Feb 16, 2022 1:00 pm IST 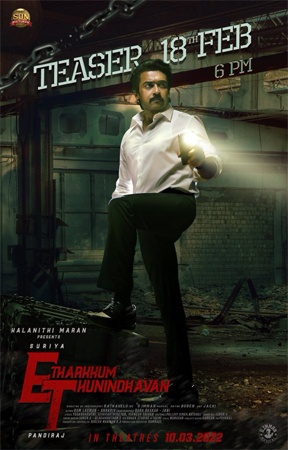 Kollywood star actor, Suriya, is coming to enthral the audiences again with his latest movie, Etharkkum Thunindhavan. Scheduled to release on March 10, 2022, worldwide, the movie is directed by Pandiraj.

The latest news is that the makers have announced that the teaser of the movie will be out on February 18, 2022, at 6 PM. A stunning teaser poster featuring the actor has also been released to confirm the same.

Priyanka Arul Mohan is playing the love interest of actor Suriya in this action thriller, produced by Sun Pictures. It is already confirmed that the movie, which has Imman’s music, will also be released in Telugu, Hindi, Kannada and Malayalam.