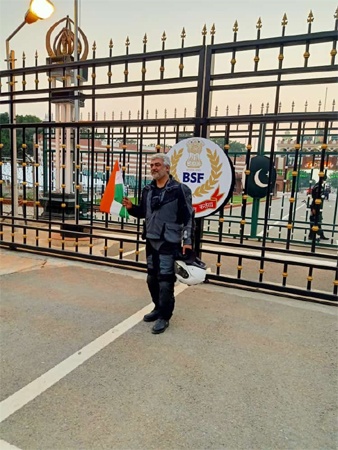 Kollywood star Thala Ajith, who has been on an all-India bike trip for the last three weeks, recently visited the Wagah border. Pictures of Thala holding the tricolour at the border and posing with army jawans are going viral on social media. Ajith also watched the parade and the crowd favorite beating retreat.

20 days ago, Ajith had left Chennai on a bike trip. He visited the Taj Mahal and Amritsar, before heading to the Wagah border. Ajith also met famous biker Maral Yazarloo and got some tips during his trip. Ajith is expected to complete his bike trip and return to Chennai in a week.

Ajith’s highly-anticipated action thriller, Valimai, is gearing up for its theatrical release on January 14, 2022, as a Pongal treat for his fans. Directed by H Vinoth, this high budget entertainer is produced by Boney Kapoor and it also features Bollywood actress Huma Qureshi and Tollywood hero Kartikeya.