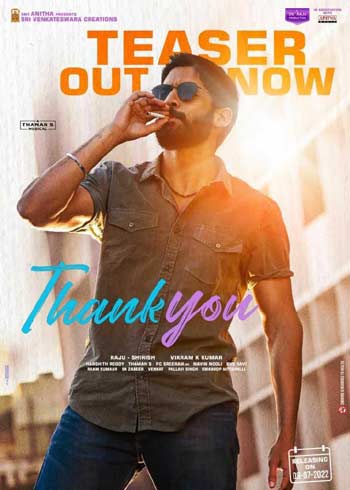 Thank You is a film that many are waiting for as it has Chay Akkineni as the main lead. Not much was known about this film until now and the makers have finally released the teaser.

Chay is shown as this rich businessman who is arrogant in life. He has committed so many mistakes in his growing-up years and all this is showcased well in the teaser.

Chay is shown in different age groups and heroines like Avika Gor, Malavika Nair, and Raashi Khanna are shown as his heroines. The teaser looks classy with great BGM by Thaman.

Looks like Chay is on a journey to Thank All those who made him realize how arrogant he was in life. The concept looks nice and director Vikram Kumar has cut the teaser in an engaging manner.

Produced by Dil Raju, Thank You is done with its shoot and will be out on the 8th of July worldwide. Watch this space for more updates on this project.