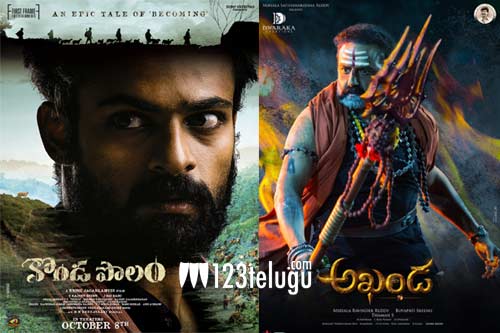 It looks like NTR and Ram Charan’s highly-anticipated multi-starrer, RRR, is almost certain to have missed out on the Dasara festive release. The latest buzz in Tollywood circles reveals that RRR has been postponed to early 2022, leaving the ground clear for other notable movies.

Now, if the ongoing buzz is anything to go by, star hero Balakrishna’s eagerly awaited action drama, Akhanda, has locked the Dasara festive weekend release. An official announcement regarding the release date will be out soon. On the other hand, young Mega hero Vaishnav Tej’s Kondapolam has already been officially confirmed for an October 8th release.

Apart from these two movies, a few other films may also be joining the Dasara box-office clash. Stay tuned for further announcements.