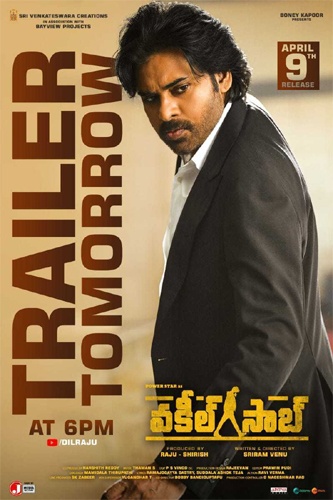 The stage is all set for the grand theatrical trailer launch for Power Star Pawan Kalyan’s most eagerly awaited comeback film, Vakeel Saab. It’s been recently reported that the trailer will be unveiled on March 29. And the makers have just announced that this much-awaited trailer will be released at 6 PM tomorrow.

Almost all the promotional materials that have been released so far, including the posters and the teaser, showcased Pawan Kalyan in a power-packed saviour avatar. The film is an official remake of the award-winning Bollywood courtroom drama, Pink. Pawan reprises Amitabh Bachchan’s lawyer’s role in Vakeel Saab.