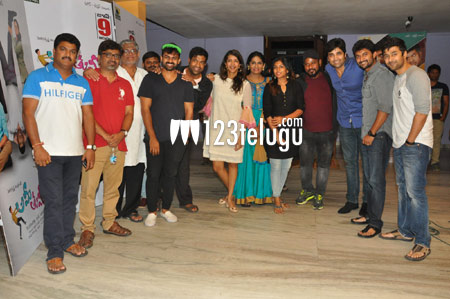 Mohan Krishna Indraganti’s latest comedy film Ami Thumi opened to good reviews and positive word of mouth. Vennela Kishore, in particular, is being praised for his outstanding role in the film, which also stars Adivi Sesh, Avasarala Srinivas and Eesha.

Yesterday, the makers organised a special screening of the film for few Tollywood celebs and stars like Nani, Lakshmi Manchu, Sai Dharam Tej and Rahul Ravindran were present at the screening. Soon after the screening, all of them unanimously praised the film and said it was a hilarious entertainer right from the beginning till the end.

Mani Sharma had scored the music. The film is expected to rake in good numbers with all this positive buzz surrounding the story and entertainment quotient.