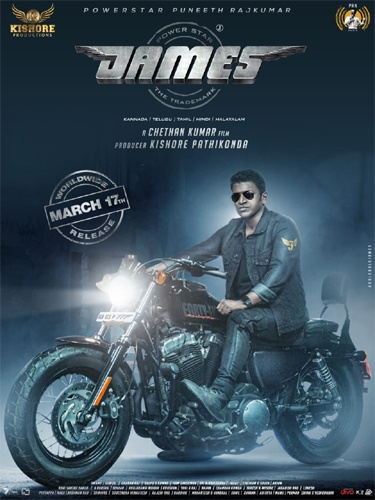 Kannada film, James, the last film of the late legend Puneeth Rajkumar, is in the news again. The makers have released the first song called Trademark from the movie, today.

The makers have expressed their happiness as the song is gaining a good response from audiences. Composed by Charanraj, the song was crooned by MC Vickey, Aditi Sagar, Shenbagaraj, Sharmila and Yuva Rajkumar in Telugu.

Famous Telugu actor, Srikanth Meka, is playing the antagonist in this action entertainer. Priya Anand will be seen as the love interest of the star hero.

Produced by Kishore Pathikonda under Kishore productions, the movie is directed by Chethan Kumar. The makers have confirmed that the movie will hit the screens on March 17, 2022, in Kannada, Telugu, Hindi and Malayalam. Actor Srikanth and Vijay M are presenting this movie’s Telugu dubbed version.