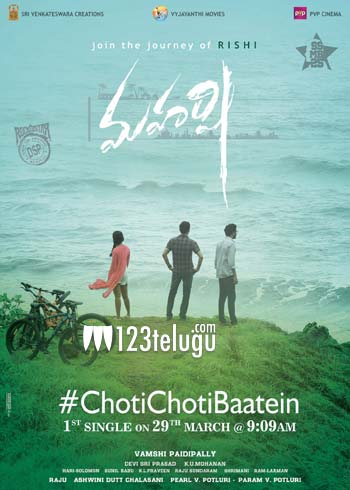 Here comes the much-awaited update on Superstar Mahesh Babu’s silver jubilee film, Maharshi. The film’s director Vamshi Paidipally took to Twitter and revealed that the film’s first single ‘Choti Choti Baatein’, composed by DSP, will be out on March 29 at 9:09 am. The director also unveiled a cool new poster to announce the beginning of Maharshi’s musical journey.

Maharshi’s shooting is nearing completion. The entire shooting formalities will be concluded by mid April. Mahesh will be seen as a university student and a New York-based businessman in the movie. The film will be a wholesome entertainer and at the same time it touches upon an important social topic.
Maharshi is slated to hit screens on May 9. Pooja Hegde is the film’s leading lady. Allari Naresh will be seen as Mahesh’s friend in the movie. Dil Raju, Ashwini Dutt and PVP are jointly producing the movie.