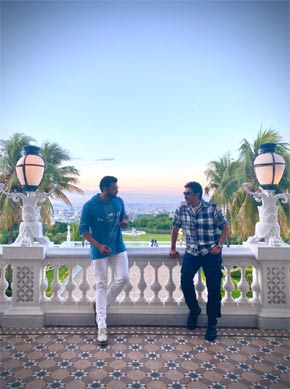 After scoring a huge blockbuster with their 2019 family entertainer, F2, Venkatesh and Varun Tej are gearing up to entertain their fans with the second film in the franchise, F3. The film is slated for release during the Sankranthi festive season in January second week next year.

This evening, Varun Tej took to Twitter and revealed that F3’s team has wrapped up a long and crazy schedule. “It’s gonna be mad fun,” Varun assured all the excited fans. The Mega hero went on to tweet a special BTS picture wherein he was seen posing with his co-star, Venkatesh. “And like always had a blast with my bro @VenkyMama. Can’t wait for the next schedule to start,” Varun concluded.

Also starring Tamannaah and Mehreen in lead roles, F3 is being directed by Anil Ravipudi and produced by Shirish. Dil Raju is presenting the movie and DSP is composing the soundtrack. Sunil also plays a crucial role in this much-awaited entertainer.

Wrapped up a long and crazy schedule of #F3
It’s gonna be mad fun!!

And like always had a blast with my bro @VenkyMama 🤗🤗

Can’t wait for the next schedule to start.🙌🏽 pic.twitter.com/ffXOw9UGW7