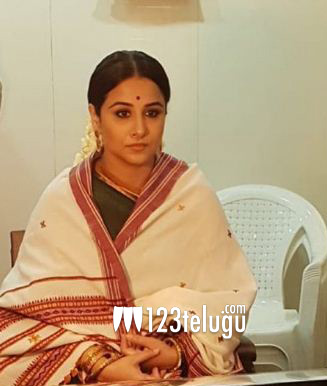 Since morning, this picture of Bollywood actress Vidya Balan in a demure and traditional avatar has been going viral on social media. This is Vidya’s look for Basavatarakam’s role in NTR biopic, NTR Kathanayakudu.

Vidya has done a lot of homework to portray the legendary NT Rama Rao’s wife’s role. She had interacted with several members of the Nandamuri family and also read a lot about Basavatarakam to bring in the authenticity factor. Vidya has shot alongside Balakrishna and Rana Daggubati for several crucial scenes.

Krish is helming NTR Kathanayakudu and Sai Korrapati and Vishnu Induri are co-producing the movie in association with Balakrishna. The film releases on January 9. On the other hand, the second part, NTR Mahanayakudu, will hit theaters on January 24.