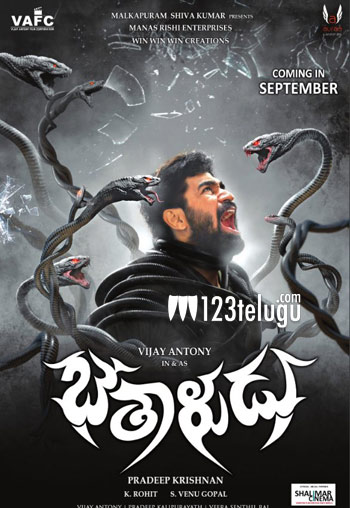 Vijay Antony, who achieved a phenomenal success with “Bichagadu,” has stored a set of surprises with his next flick “Bethaludu,” the dubbed version of “Saitan.” The movie is said to be a horror thriller which is produced by Vijay himself under his own banner ‘Fatima Vijay Antony Company.’

After an emotional movie like “Bichagadu,” “Bethaludu,” marks to a whole different genre. The film is based on a thriller novel “The Girl with the Dragon Tattoo.” The recently released trailer looks promising, setting humongous expectations for the movie.

The movie has wrapped up the entire shoot and was supposed to be released on 17th November. However, the latest reports reveal that the movie’s release date has been postponed keeping the currency ban effect in mind.

After “Bichagadu,” hope this movie also stands out to be a great milestone in Vijay Antony’s career.