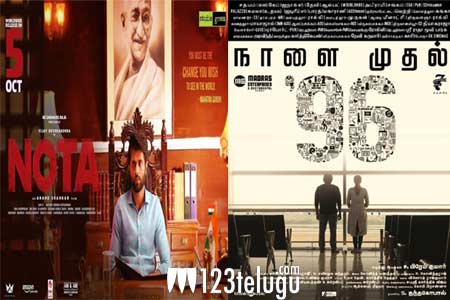 Within a short span, Vijay Devarakonda has become a sensation of sorts in both Telugu and Tamil. He will be making his Tamil debut with the political drama ‘NOTA’ which will hit the screens this Friday.

Vijay has severe competition during the time as yet another much-awaited film 96 is releasing tomorrow. The film has Vijay Sethupati and Trisha doing lead roles and there is a massive craze for this film.

If ’96’ becomes a good hit, there will be severe competition for Vijay and he needs to prove his worth amidst well-established stars like Vijay Sethupathi. NOTA is directed by Anand Shankar and has Mehrene as the female lead.