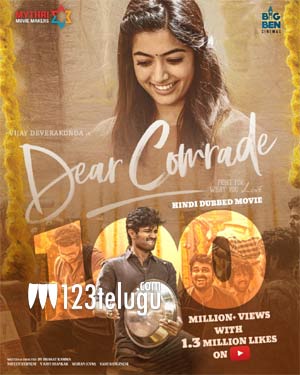 Young stars Vijay Deverakonda and Rashmika Mandanna’s critically acclaimed emotional drama, Dear Comrade, may have failed to set the box-office ablaze upon its release last year. However, the film is ruling the roost on YouTube.

Dear Comrade’s Hindi version was released on YouTube on January 19. Within 2 and a half months, the film has clocked over 100 million views and also amassed over 1.3 million likes. This reiterates the massive craze the film has attained among the North Indian movie lovers.

Dear Comrade was directed by debutant Bharath Kamma and produced jointly by Mythri Movie Makers and Big Ben Cinemas. The Hindi version has been released by Goldmines Telefilms.