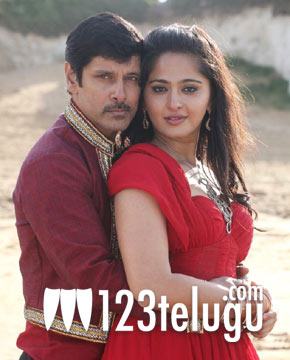 Vikram, Anushka and Jagapathi Babu’s upcoming bilingual film has been titled as Shiva Thaandavam in Telugu. AL Vijay has directed the film and UTV Motion Pictures is producing the film. The film’s Tamil version has been titled as Thaandavam and recently, the film’s principal shooting was wrapped up in Chennai. Most part of the film has been shot in Chennai, New Delhi and London. Amy Jackson and Lakshmi Rai are also playing important roles in this action film. Dhananjayan Govind, Head of UTV South, revealed that the Telugu version’s will be officially launched on July 13 in Hyderabad. Vikram, Jagapathi Babu, Amy Jackson, Lakshmi Rai and AL Vijay are going to attend the event. GV Prakash has composed the music. The film is expected to hit the screens in September.