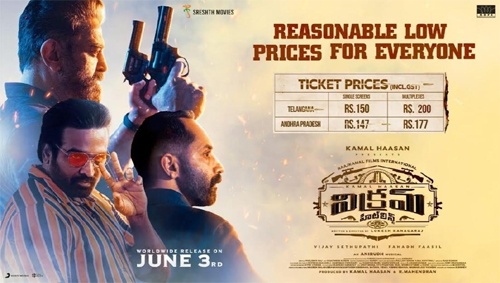 Universal actor Kamal Haasan has teamed up with the young and talented director Lokesh Kanagaraj for an action entertainer, Vikram. The Kollywood film is ready to hit screens worldwide tomorrow.

The news is that Vikram is also following the footsteps of Major in terms of ticket prices in Andhra Pradesh and Telangana. The makers have announced that the movie can be watched at affordable prices in Telugu states. The maximum ticket price in AP is Rs. 177 whereas in Telangana is Rs. 200. It’s a good movie from the makers to make people watch it on big screens.

Vikram also has Fahadh Faasil, Vijay Sethupathi and Suriya in crucial roles. Anirudh Ravichander is the music director for this movie, which is produced by Kamal Haasan and R Mahendran.