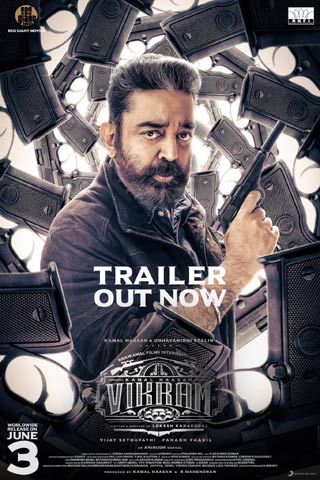 Vikram, starring Kamal Haasan is the most awaited Kollywood movie in recent times. Directed by Lokesh Kanagaraj, the biggie also has the star actors Vijay Sethupathi and Fahadh Faasil.

The makers of the movie have held a grand audio launch event in Chennai. In the meantime, they have released the theatrical trailer of the movie. The trailer is so impressive and packed with powerful action scenes. From start to finish, the trailer looks terrific. The screen presence of Kamal, Vijay and Fahadh are so good. The background score is an add on to the well-cut trailer.

The action-thriller is bankrolled by Kamal Haasan and R Mahendran under Raaj Kamal Films International and Red Giant Movies on a grand scale. Anirudh has composed music for this multilingual movie, scheduled to release on June 3, 2022, worldwide.