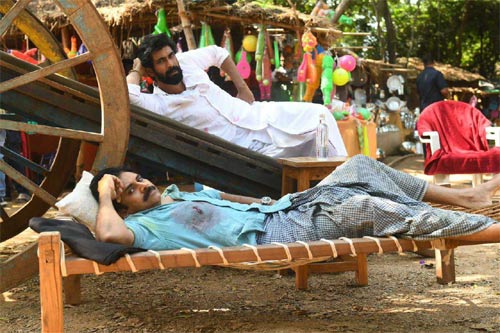 This special behind the scenes picture of Pawan Kalyan and Rana Daggubati on the set of their upcoming action drama, Bheemla Nayak, is going viral on social media. Pawan and Rana or capture while unwinding off the camera on the film’s set in between a heavy-duty fight scene.

In Bheemla Nayak, Pawan plays the titular role, while Rana portrays Daniel Shekar. The films action-packed schedule is currently underway in Hyderabad, and a major portion of the film’s shoot will be wrapped with the ongoing schedule.

Bheemla Nayak is an official remake of the acclaimed Malayalam action drama, Ayyappanum Koshiyum. The film is being directed by Saagar K Chandra and produced by Naga Vamsi. Trivikram has penned the screenplay and dialogues for the movie and Thaman is composing the soundtrack. The film is slated for a worldwide release on January 12.