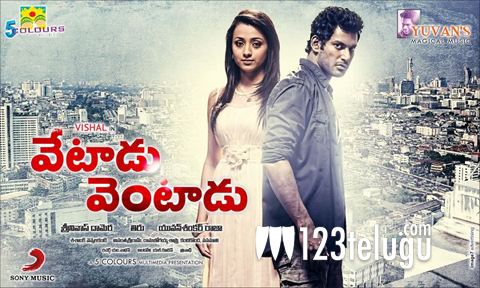 Vishal, Trisha starrer Vetadu Ventadu is all set to hit the screens on December 21. Thiru has directed the film and the film’s Telugu version is being presented by Srinivas Damera under Five Colours Multimedia banner. The film has been extensively shot in China, Malaysia, Bangkok and it’s the biggest budgeted film till date in Vishal’s career. Talking about the film, Srinivas Damera said, “The film’s audio which was launched recently has got a good response and the first copy is ready. Vetadu Ventadu is an action packed thriller and it’ll be a milestone in Vishal’s career. We are planning to release the film on December 21.” The film also has Sunaina Yella, Manoj Bajpai, Jayaprakash, Sampath Raj and J D Chakravarthy in important roles. Yuvan Shankar Raja has composed the music and Richard M Nathan is the cinematographer.