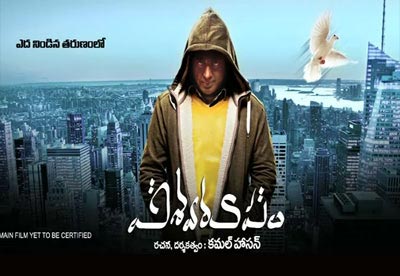 Kamal Haasan doesn’t seem to be in a mood to relent amidst the backlash from theatre owners in Tamil Nadu about the release of Vishwaroopam. He had already announced that the film’s Tamil version will be premiered on DTH 12 hours before its theatrical release across the world. After a lot of discussion, the theatre owners decided to not support Kamal Haasan’s plan and many thought that the iconic actor, producer, writer and director would backtrack. But now, Kamal Haasan has announced that the film will be premiered on Airtel DTH in Telugu and Hindi, apart from the Tamil version.

“I’m proud to be associated with Airtel DTH in this pioneering venture, which takes the combination of entertainment and technology to even greater heights. I’m very happy with the thought that many more viewers will be able to enjoy ‘Vishwaroop’/ ‘Vishwaroopam’ in the comfort of their homes,” Kamal Haasan said in a press statement.

On the other hand, families with Airtel DTH will have to pay Rs 1000 for a single viewing of Vishwaroopam on January 10 at 9:30 PM. While the pricing does seem on a higher end, Kamal Haasan has reasoned that the families don’t have to spend much on food & beverages and travel which are some of the factors which have made movie watching experience, for a family, a costly affair in the recent few years. Incidentally, the film’s Telugu version is likely to release two weeks after the film’s premiere on DTH. We’ll have to wait and watch how that’s going to have an impact on the theatrical collections of the film. Vishwaroopam stars Kamal Haasan, Pooja Kumar, Andrea Jeremiah and Rahul Bose in lead roles. Kamal Haasan has written, produced and directed the film.