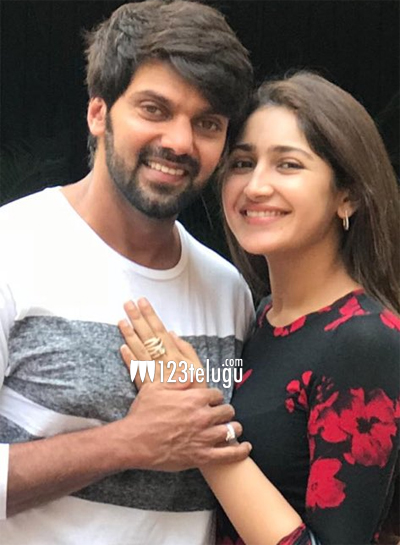 Few weeks ago we had reported that Tamil star Arya and Sayyeshaa have decided to getting married to each other. The two had acted together in Ghajinikanth, the Tamil remake of Bhale Bhale Magadivoy, and they will soon be seen in KV Anand-Suriya’s upcoming film. The couple have been dating for the past few months, and both their families have given their approval for their wedding.

Recently, Sayyeshaa’s family hosted a grand sangeet ceremony in Mumbai and several big wigs from Bollywood, including Sanjay Dutt, Boney Kapoor and Kushi Kapoor, and former cricketer Sunil Gavaskar graced the event. The couple is going to get married in Hyderabad, and it is said that the wedding will be a lavish affair spread over two days on March 9 and 10.

Sayyeshaa had made her acting debut with Akhil, and she went on to act alongside Ajay Devgan in Shivaay. She is the grand niece of veteran Bollywood actors Dilip Kumar and Saira Banu.