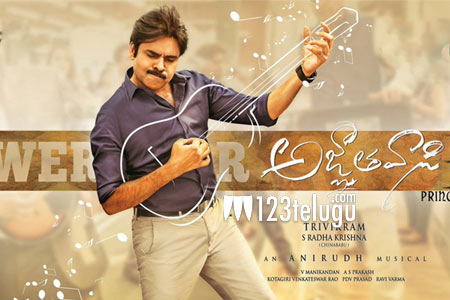 The song goes like ‘Dhaga Dhaga Maney Thoorupu Disa’ and it vividly describes the hero’s journey from his exile towards an important mission. Srimani’s powerful and thought-provoking lyrics elevate heroism and yet the words are rich in poetic value. Anirudh’s energetic vocals and orchestration make this song one of the best in the album.

Undeniably the best song in the album, Baitikochi Chusthe has already been a rage among fans and music lovers. The romantic side in hero’s persona comes out quite effectively through Srimani quirky and impressive lyrics. Phrases like ‘Apple pandula Suride’ and ‘Challa gaale villain la’ is a refreshing experiment by Srimani. Once again, Anirudh’s breezy vocals and vibrant music make this song an instant chartbuster.

Originally composed by the 18th century Carnatic music exponent Oothukkadu Venkata Subba Iyer, this popular song is in praise of Lord Sri Krishna. The Sanskrit phrases in the prelude, Niranjana’s mellifluous vocals and Anirudh’s classic reinterpretation together make for a soothing melody. This song was used in the film’s teaser and Trivikram must have placed this song at a crucial juncture in the film’s narrative.

This song too was released a few days ago and it has already turned out to be a huge hit with fans. Trivikram teams up with the legendary lyricist Sirivennela after a long time and the duo has come up with a melodious beauty. Apart from Sirivennela’s trademark poetic brilliance, the song’s another major highlight is Anirudh’s earnest rendering of the love number. This song will surely reverberate in all the young hearts for a long time.

This fun, peppy number explains the sweet plight of the hero who is stuck between the two heroines. Trivikram’s penchant for classy lyrics is clearly visible in this song. Srimani plays around with the phrases like ‘Chandrude chukkallo chikkero’ and ‘O prema vihari eturaa ni daari’ which describe hero’s confusion. Nakash Aziz and Arjun Chandy’s vocals add peppiness to the song. This situational song will click even better with the visuals on-screen.

Pawan has a strong fan base among the masses and any director would have played it to the gallery with a couple of mass numbers in the audio album. However, Trivikram once again proves that he’s a class apart and together with Anirudh, the maverick director comes up with a classy album for Agnyaathavaasi. Gaali Vaaluga, Baitikochi Chuste and Dhaga Dhaga Maney are our picks of the album. AB Yevaro Nee Baby and Swagatham Krishna may click with the audience when they watch them on the big screen. All in all, Agnyaathavaasi’s audio album has classy vibes to it and Pawan’s fans will surely enjoy this tastefully done music for a long time.