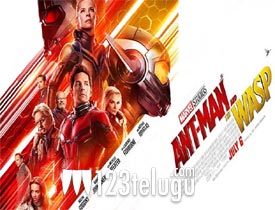 Ant-Man and the Wasp created a whole lot of buzz, thanks to some incredible trailers. The film has hit the screens today and let us check whether the movie lives up to the humongous expectations laid upon it.

Scott Lang(Paul Rudd) is a struggling father who finds it tough to cope up with his parental duties as he is paying the price for his deeds in the past(Misusing the Ant-Man suit). To his surprise, he is approached by Hope Van Dyne(Evangeline Lilly) and Hank Pym(The creator of the Ant-man suit) who are on a mission of finding their beloved family member. Scott sees this as a perfect opportunity to make amends for his wrongdoings. Little does he know that he is putting himself in immense danger. What is that mission? What are the hurdles Scott has to overcome? What is the mind-boggling twist that opens the lid to a wide range of speculations regarding Avengers 4? Catch the movie on big screens to know the answer.

The inclusion of Wasp in this Ant-Man outing adds a lot of punch to the core plot. The director creates a perfect fusion of emotions and fun between Ant-Man and Wasp, enhancing the chemistry between the lead pair.

The theory of quantum realm is used extensively and this field of physical science plays a key role in the plot. The writers did a great job in keeping things simple and came up with instantaneous explanations(Conversations between characters) that clear the doubts on the minds of the viewers.

Paul Rudd proves that he is the right actor to fill in the shoes of Ant-Man. His comedy timing is on point and he is near-to-perfect in the role of a superhero(or a miniature hero in this case) who knows very little about what is happening around him.

Here comes the most awaiting part. As revealed earlier, the sequence that runs after the post-credits offers a massive twist in the tale for the audience who have watched Avengers Infinity War.

Similar to the first part, Ant-Man and Wasp is stuffed with comedy and emotions that could, at times, supersede the core plot. The movie takes its own sweet time to get into the storyline and that may put off a section of the audience.

For the most part, the director keeps giving indications that the climax will be filled with drama. However, things come to an end on a dull note and the viewers can easily predict what is about to happen for the last half an hour or so. This will surely disappoint many viewers who expect some engaging action, owing to the buildup sequences that are shown in the first half.

During the climax episode, things get slightly engaging, but the time-lapse sequence that runs on the lead cast affects the flow of the film. Also, the pre-climax episodes look a bit rushed and the uneven screenplay is to be blamed here.

The director, Peyton Reed manages to keep this movie as a fun ride and that will go well with a younger section of the audience. However, one may expect more drama from a Marvel outing, but that is not the case with this movie.

The music department has done a commendable job as the sound that has been used during scenes relating to quantum physics create an authentic vibe. The movie has a fair share of action sequences, but the short and crisp approach towards these episodes will work in its favor.

On the whole, Ant-Man the Wasp is a fun ride that runs high on comedy and emotions. The mind-boggling twist that is unleashed after the post-credits is one to watch out for all the followers of Avengers franchise. This outing from Marvel will fill your cravings for action but falls short on drama. Barring this flaw, Ant-Man will surely keep you entertained for 2 hours and that is enough for you to go and watch the film.