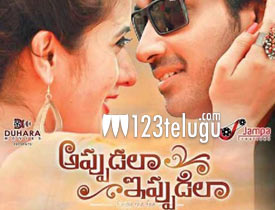 Surya Teja, who was introduced to Telugu audience through Vinayakudu is finally debuting as a hero with Appudala Ippudila. The rom-com entertainer has hit the screens today. Let’s see how the film fares.

Laxmi Narayana (Suman) is into sweets business. One fine day, he decides to help four people who have supported him during his tough times. After helping three members, he unfortunately passes away.

His son, Chaitanya (Surya Teja) takes up the task and meets the fourth person, Jagadish Chandra (Naresh) who is also a business magnet. Although, Jagadish Chandra denies Chaitanya’s help in the beginning, the twist in the tale comes when he in turn asks Chaitanya to make his daughter (Harshaki Punacha) fall in love with him.

Why does Jagadish Chandra ask for such an odd favour? How does Chaitanya manage to accomplish this task ? and what happens at the end forms the rest of the story.

Even though it is his debut as a lead, Surya Teja has managed to pull of a commendable performance. It’s a cake walk role for senior actor Naresh and he impresses big time. Harshaki looks beautiful although her acting is strictly OK.

Even though its a small budget film, the production values are excellent. The underlying message behind the whole plot is positive and the story around it has been built-up well. A few dialogues are spot on while Sunil Kashyap’s music is another asset for the movie.

The biggest minus point with Appudala Ippudila is that even though the basic theme is wonderful, the director failed to translate it successfully on screen in an entertaining manner.

The narration and screenplay have also been handled poorly as the film drags quite a bit. The lengthy run time also ruins the proceedings big time. A few songs come as major speed breakers in the second half.

The characterization of the lead pair is also quite poor as they react weirdly in a few situations. Supreet’s track as Bubbly Reddy fails to impress and looks out of place. The overall comedy in the film is quite boring and mundane.

Coming to the technical departments, Appudala Ippudila has nothing special to offer. The cinematography manages to stand out, while songs by Sunil Kashyap are quite good. As already mentioned, production values are excellent while the screenplay and narration have faltered completely. Editing is jaded and not up to the mark.

The director is to be blamed completely as he failed in entertaining the audience big time. Even though the theme was good, he failed to execute the story properly as the film ends up boring the audience.

Even though good production values and a positive theme manage to give Appudala Ippudila a few brownie points, the direction and handling of the story manage to overshadow everything else. With a bunch of movies already releasing this weekend, we suggest you to put your money some place else.