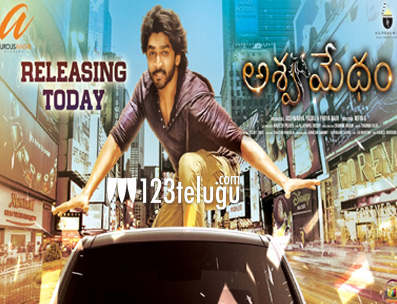 Dhruva(Dhruva Karunakar) an undercover IB (International Baccalaureate) agent is on a mission to catch the culprits, who intend to loot the National treasure by using professional hackers. In the process, Dhruva comes across a senior IB officer Shankar Kailash(Suman) and with his help, he traces the culprits, who planned for the major war on our country. How did Dhruva crack the case is the film all about.

Looks like hero Dhruva got well trained in fights and dances and did a decent job in those departments. He has maintained a well-toned body which is so apt for the given undercover IB agent’s role. The scenes between Suman and Dhruva are executed in a nice manner.

Serial actor Ambati Arjun is impressive in a baddie’s role. Heroines Sonyaa and Shivangi are okay in their roles. Actor Priyadarshi Pulikonda gets a meaty role and performs decently. The same is the case with Vennela Kishore, who evokes a few laughs in the second half. The pre-climax action block has come out in a nice manner.

Addressing a National security-related issue is good but when the makers are saying a point related to the country, the audience will expect a new kind of narration which is totally missing in the film. The entire first half has abrupt scenes and gives a hint that something big will be showcased in the second half. But sadly the latter half also runs on the same parameter as the first half. The film has a serious narration and those who expect fun elements and nice duets may get disappointed.

As said above, director Nitin Gawde’s intention to showcase an issue related to the national economy is fine but his execution lacks a perfect screenplay and narration. Cinematography by Jayapal Reddy is good as the color texture he used is appealing to the film’s theme. Editing by Thammi Raju is decent too as he kept the film’s runtime in limits.

Choreography by Ganesh Swamy is good for the introduction song of the hero. Charan Arjun’s music is okay as two songs are nice to listen and he also did an okay job with the background score. Production values for this limited budget film are good.

On the whole, Ashwamedham is a crime drama with a good theme but lacks novelty in narration. Hero Dhruva’s hard work is visible on the screen but the director failed to execute the film in an engaging manner making it dull and boring in several areas. All we suggest is to skip the film for this weekend and watch it when it is aired on TV.