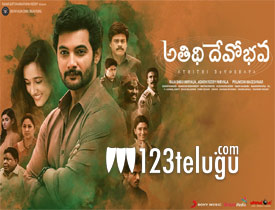 Young hero, Aadi Sai Kumar is back with his new film Atithi Devo Bhava. The family drama has hit the screens today and let’s see how it is.

Abhi(Aadi Sai Kumar) suffers from a problem called Mono Phobia. Because of this, he cannot survive alone and always expects someone to be on his side. In this process, he falls in love with Vaishnavi(Suveksha). When everything seems to be going fine, Abhi’s phobia creates new issues in his love story. How does a person with such delicate issues handle his love story? That forms the rest of the story.

The basic conflict point in the film is quite good. Aadi Sai Kumar is quite impressive in his role. He tried different variations and impressed one and all with his all-around performance as a person who lacks confidence.

Heroine Suveksha does a very good job in her role. Be it in her romantic avatar or in all the emotional scenes, she does quite well. Rohini as the mother gives an honest performance. It was quite good to see Saptgagiri in a good role and he impressed big time.

Even though the story of the film looks new, the narration is jaded. The director takes a lot of time to establish the lead characters. All this goes on in the first half making things boring. Though there was a good scope to elevate the conflict point, he did not make use of it.

Moreover, major characters in the film look a bit helpless most of the time. There are not many scenes that make the audience get involved in the story which is also a big drawback.

The music by Sekhar Chandra is good but the BGM was not up to the mark. The camera work was also good and showcased the story is a decent manner. Dialogues were decent and so was the production design. Coming to the director Nageswar, he did a below-par job with the film. Even after having a decent story, his narration went for a toss.

On the whole, Atithi Devo Bhava has a novel point but it is narrated in a slow and dull manner. The performance of Aadi Sai Kumar is good but could not save the film from sinking and makes it a dull affair this week.