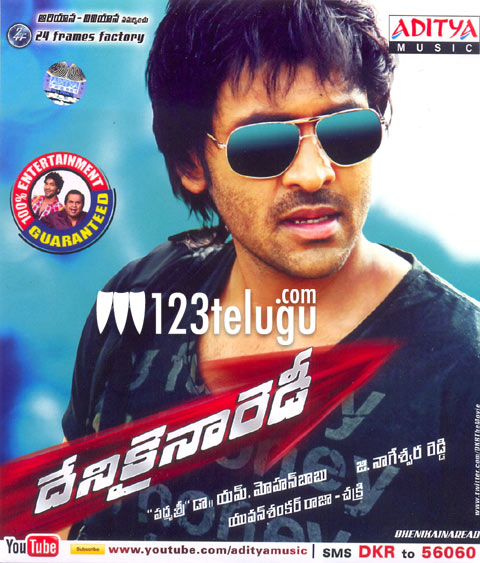 Manchu Vishnu’s ‘Dhenikaina Ready’ is gearing up for release this Dussehra. The movie has Hansika as the female lead and G. Nageshwar Reddy is the director. Music has been composed by Chakri and Yuvan Shankar Raja. The audio album has been released sometime ago so let us see how the album is.

This number will undoubtedly be the hero’s introduction song in the movie and it is one of the two tracks composed by Yuvan Shankar Raja. The music has his signature peppy beats and Shankar Mahadevan has rendered the lyrics with good energy. Ramajogayya Sastry has written good lyrics. A good fast paced number overall.

This song is perhaps set in a moving train or during some idle time in a railway station. The song has a very laid-back feel to it and Hemachandra is very effective with the vocals. Chakri’s music is suitable for the mood of the song and native instruments have been used predominantly. This song has good scope for entertaining picturization.

This romantic duet has vocals from two talented singers – Adnan Sami and Geetha Madhuri. They render the number with good energy and the song has a mass feel to it. Chakri’s music reminds us of some of his previous tunes but it is decent. Expect this song to be shot in colourful locales with rich visuals. Bhaskarabhatla’s lyrics do the job.

Pilla Neevalla is a soft melody and this is the second song composed by Yuvan Shankar Raja in this album. The song grows on you slowly but surely. Anantha Sriram’s lyrics are nice and give a romantic feel to the song. Yuvan Shankar Raja and Shraddha Pandit have done a good job with the vocals. Music is perfect for the mood of the number. A very enjoyable track overall.

This is a mass number aimed at the front benchers. The song has good pace and energy, with rustic music from Chakri and earthy lyrics from Bhaskarabhatla. Expect some energetic dances from Vishnu in this song. The song will work with good picturization and will cheer up the masses greatly if placed at the right moment in the film.

‘Dhenikaina Ready’ is a youthful and peppy album that has music from two successful music directors – Yuvan Shankar Raja and Chakri. Both of them left their own unique mark on the album. The predominant quality of Dhenikaina Ready’s musical album is its peppy nature. The tracks have good pace and are youthful. “Naalaaga Nenuntaanu” , “Pilla Neevalla” and “Panche Kattuko” are my picks among the songs.