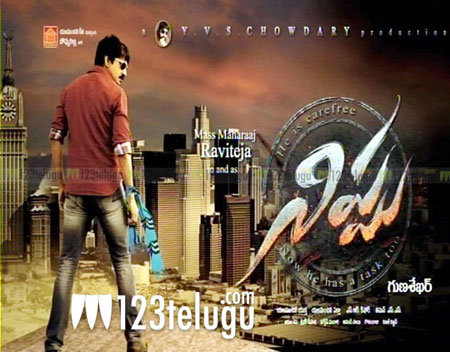 Mass Maharaja Ravi Teja and hot beauty Deeksha Seth have teamed up for the upcoming movie ‘Nippu’. The movie has been directed by Gunasekhar and Y.V.S.Chowdhary is the producer. Thaman has composed the music. The audio album of this movie has been released recently and it contains seven songs in all. Let us see how the audio album stacks up.

This is a very energetic number that has been rendered with a lot of enthusiasm by Shankar Mahadevan. This song will most likely be used to introduce the hero in the movie. In usual Thaman style, there is a heavy use of the synthesizer and percussion instruments. Music is peppy and complements the audio track well. Chandrbose’s lyrics are ok.

This romantic duet starts off on a lovely note with some beautiful music and Chitra’s melodious voice. Karthik and Chitra complement each other well and they do a very good job with the vocals. Chitra’s performance actually elevates the song to a new level. Vanamali’s lyrics are good. Music is pleasant to listen to but is very routine stuff. A very pleasant number to listen to.

This is a solo number that praises the virtues of friendship. Javed Ali is ok with the vocals and Viswa’s lyrics are nothing to write home about. This song will most likely be used to showcase the strong bond between some of the principal characters in the movie. Music is ok but once again, the synthesizer dominates the score.

This is a rustic duet that has a very ‘mass masala’ flavour. Tippu and Harini make sure that this is conveyed in their performance. Rama Jhogayya Sastry’s lyrics are just about ok. Music is dominated by drums and synthesizer beats. Native instruments and beats should have been used to complement the vocals perfectly. This song will click if picturized well on screen.

This solo number will be picturized on the hero as he runs after the heroine either to woo her or pacify her if she is angry. Bhaskarabatla’s lyrics are ok. Songs of this kind require tremendous variations in the vocals and Thaman’s performance lacks in this aspect. He renders the vocals in a monotonous way. Music sounds repetitive and there is nothing to write home about in this department

This number has ‘function song’ written all over it right from the opening beats. The song will most likely be picturized at a wedding. Anantha Sriram’s lyrics are ok. The vocals department is led by some very talented artistes, but sadly, there is nothing to write home about in their performance. Part of the blame for this goes to Thaman’s music. There is more noise than sound. We have heard this music in Thaman’s films earlier.

The classic ‘Maha Ganapathim’ sloka is rendered beautifully by Sravana Bhargavi. This bit number will most likely be picturized on the heroine or the hero’s sister during an early morning puja scene in the house.

Verdict : Nippu is a very commercial album that tries to play to the strengths of Ravi Teja. There is a lot of energy in most of the tracks and you can expect Ravi Teja to make full use of this aspect. But this is definitely not one of his best albums and the blame lies with the music director. Thaman is getting extremely repetitive and monotonous. Noise is drowning out melody and he needs to watch out for that. ‘Vega Vega’ and ‘Nena Ninnu’ are my picks from this album.