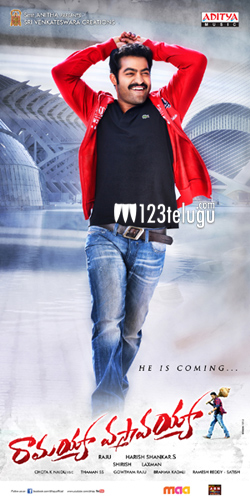 Young Tiger NTR’s ‘Ramayya Vasthavayya’ is gearing up for a release next month. The audio album has been unveiled yesterday, in a simple but nice event. Thaman has composed the audio album for this movie and going by the promo songs, he seems to have done a good job. Let us check out the songs now and see if they can live up to the expectations. Samantha is the heroine in this movie and Harish Shankar is the director

‘Jabilli Nuvvecheppamma’ is a melodious solo number that is refreshingly soothing to listen to. From Anantha Sriram’s lyrics, it is apparent that the song will be used in a sequence where NTR tries to mollify an angry/hurt Samantha. Ranjith has done a good job with the vocals.Thaman’s music is perfect for the mood of the song. His trademark percussion beats can be felt, but they stay actually complement the song quite nicely this time. This is one of the best songs from the album without a doubt.

This will most probably be the introduction song of the hero in the film. ‘Pandaga Chesko’ is a typical Telugu cinema solo number that establishes the hero’s nature in the film. I was faintly reminded of Prabhu Deva’s ‘Oorvasi Oorvasi’ from ‘Premikudu’. Expect some terrific steps from NTR in this number. Srimani’s lyrics are ok. Thaman has come up with a simple and safe tune for this number. Percussion instruments dominate the sound. Overall, a decent number.

‘O Lailaa’ is once again a solo number from this album. Rahul has taken of the vocals here. Bhaskara Bhatla has penned the lyrics and we can infer from the verses that the hero is trying to woo the heroine with funny promises and assurances. Music is peppy but it has a certain ‘wedding orchestra’ feel. This is an OK number that might work if it has good visuals.

‘Neneppudaina’ is a lovely romantic duet. Two very talented singers, Shankar Mahadevan and Shreha Ghoshal, have taken care of the vocals and their class shines through. Sahithi has penned the lyrics and the verses are good. Thaman has come up with a very catchy tune for this song. The song has been shot in Spain, on NTR and Shruti Haasan. ‘Neneppudaina’ will make an instant impression and should become quite popular.

‘Kurrayeedu’ is a mass number that is aimed at the front benchers. Shankar Mahadevan and Suchitra have taken care of the vocals and Srimani has penned the lyrics. The song has a very rustic tune and Thaman’s trademark mass beats can be heard in the song. The peppy nature of the track gives good scope for NTR to showcase his dancing skills.The song ends up as a decent number.

This is a rousing number that will most probably used during an action sequence or a flashback episode. Ranjith has rendered this number with good energy and feel. Srimani has penned some pretty good lyrics for this song. Thaman’s music is perfectly in sync with the mood of the song and the tune conveys the right emotions. This song grows on you after you listen to it for a few times. Expect some pretty powerful visuals for this number.

The audio album of ‘Ramayya Vasthavayya’ is a fusion of melodious and peppy tunes. ‘Jabilli Nuvve Cheppamma’, ‘Neneppudaina’ and ‘Idhi Ranarangam’ are my picks from this album. ‘Jabilli Nuvvecheppamma’, in particular, deserves special mention for being one of the best melodies in NTR’s career. Harish Shankar and Thaman have worked together to come up with a nice platform for NTR to showcase his talent.