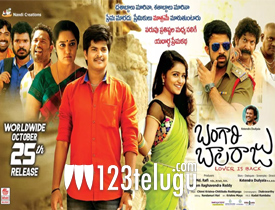 Continuing the trend of low budget films, yet another movie which has hit the screens today is Bangari Balaraju. Let’s see whether the film has anything interesting in store for us.

Balaraju(Raghav) is a happy go lucky youth who spends most of the time with his close friends. In one unexpected incident, he spots the eyes of Bangari(Karonya) and falls in love with them. After a point of time, he comes to know that the girl and the eyes he loves are none other than of Bangari who is also the daughter of his village head Jagga Reddy. The twist in the tale arises when Jagga Reddy comes to know about this and starts creating problems for Balaraju. Rest of the story is as to how Balaraju solves his problems and marries Bangari.

Debutante Raghav was okay in his role of Balaraju. Except for a few emotional scenes, he did a decent job for his first film. Dookudu fame Shravan did a key role and was good with his part.

Coming to the heroine Kaonya, she looked glamorous and also performed well as the fun loving girl. Comedians Kirrak RP and Jabardasth Bobby did well and brought a few laughs here and there. Meena Kumari, who played the hero’s mother was the highlight of the film with her emotional and balanced role.

Even though the director chose a decent concept, his execution was horrible. The first half goes for a toss as many scenes and songs disturb the flow of the film completely.

The hero’s characterization is also not that impressive. As the star cast was relatively new, the needed depth in the proceedings was missing completely which took down the film in no time.

Camerawork by J L Babu was quite impressive as he showcased the low budget film in a decent manner. Music was decent but the way the songs were placed made them disappointing. Editing was bad as many scenes in both the halves could have been edited. Coming to the director Kotendra, he is the one who is to be blamed for the boring execution as his taking had no depth at all.

On the whole, Bangari Balaraju is an outdated and disappointing village drama which has nothing new to offer. The artificial emotions, lack of good star cast and silly execution, irritates the audience completely making this film a boring watch. Ignore it and look for something else this weekend.