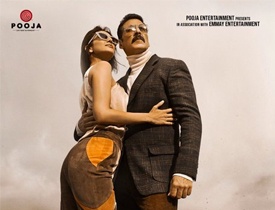 Bell Bottom is a big film that has hit the screens all over the country. Starring Akshay Kumar and Vaani Kapoor, this film is a spy drama, and let’s see how it is.

The film is set in 1984. An Indian plane gets highjacked by Pakistani terrorists and the government of India led by Indira Gandhi(Lara Dutta) is forced to have negotiations with the Pakistani’s. In enters Anshul aka the RAW agent Bell Bottom(Akshay Kumar) who asks the PM to stop all negotiations. He takes things in hand and brings the hijacked plane back in a safe manner. How does he do that forms the story of Bell Bottom?

Akshay Kumar is the best part of the film and does well as the Raw Agent. As expected, Akki’s dialogue delivery and screen presence elevate the film well. Lara Dutta plays Indira Gandhi and she is quite convincing. A special mention for her perfect makeup.

Vaani Kapoor does not have much to do in the film. The second half is where all the action begins and the film is packed quite well during this time. Huma Qureshi is also neat in her short role. The actors who played Pakistani agents are decent. The production values and setup looks good and is showcased by some good camera work.

The flashback episodes of Bell Bottom disturb the flow of the first half. Things take a lot of time to get to the main point. The first half is dull and has the same repeated scenes of India Pakistan rivalry and how soldiers give their best for the country.

The major action part as promised by the makers is clearly missing in the film. The film has more drama and it could have been better. There are some good moments in the second half related to India but we have seen them in so many films earlier.

The film moves on a good note in the second half but the makers should have edited a few routine and montage shots to make the film crisp. The film has a predictable narration as the audience knows what twist is going to come next.

As said earlier, the makers have spent well on the film and this shows on screen. The costumes and makeup in this period drama are effective, Music is below par but the BGM in the second half was engaging. The VFX done is just about okay and could have been better.

Coming to the director Ranjit M Tewari, he has done just an okay job with the film. He only builds up the drama in the first half which has nothing much to showcase or thrills us. Things work in the second half but they too are mediocre.

On the whole, Bell Bottom is a hijack drama with an ordinary first half and decent second half. The entire first half is only a build-up to the main story and this is where things get dull. If you sit through this boring part, the second half and Akshay Kumar’s sincere effort make this film a passable watch this weekend.