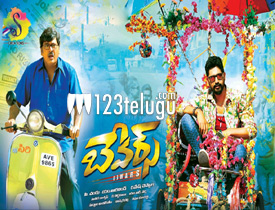 Bewarse is one film which has made a decent buzz because of its emotional trailer and Rajendra Prasad’s key role. The film has hit the screens today and lets see how it turns out to be.

Satyamurthy(Rajendra Prasad) is a small-time businessman who is always worried about his careless son’s(Sanjosh) future. Both father and son get into fights most of the time and Lucky’s sister, Siri is the only one who supports her brother. The twist in the tale arises when Siri commits suicide because of all the family problems. Rest of the story is as to how the father and son keep their differences aside and end up living happily thereafter.

Rajendra Prasad leads from the front and gives an emotional performance. It is because of him that the film becomes quite moving in many areas. The way the senior actor showcases superb emotions after his daughter’s death and during the climax will move you completely.

The family relationship showcased between the father and daughter has been written well. The actress who did the role of Siri was very good and is the main key of the film. The way her role is designed and has a twist in the end also looks neat.

The suspense element that is executed during the last fifteen minutes ends the film on a good note. Certain family emotions in the second half work well. Also, the message conveyed is neat and contemporary. Heroine Harshita Panwar looks decent and does her part in a simple manner.

The main lead of the film, Sanjosh needs to learn a lot as he looks way too rustic for such an emotional role. As his role has due importance, the performance expected from him is not extracted by the director. A well-known artist would have made things better.

All the episodes of comedian Madhu look outright silly and suffocate you in both the halves. There is no proper flow in the first half as some good scenes are interrupted by many boring episodes which sideline the film. There is absolutely no chemistry between the lead pair and the love track looks out of place.

The father and son relationship should have been dealt well in the second half by designing some good emotional and confrontational scenes. The narration of the first half is completely jaded and the audience gets interested only after the first half.

Production values of this medium budget film look decent. Music by Sunil Kashyap is just about okay but his BGM in all the emotional scenes was good. The camerawork is neat and showcases the middle class set up in a superb manner. Editing is horrible as the film could be trimmed close to 20 minutes straight.

Coming to the director Ramesh, he had done a half-hearted job with the film. His premise is good, the twist he planned is interesting but his overall narration looks jaded. He adds so many silly scenes and makes the good script go haywire.

On the whole, Bewarse is good script gone wrong kind of a film. What could have been a feel-good family entertainer is spoilt by some illogical and wayward narration. Rajendra Prasad leads from the front and elevates many emotional scenes to a level. But to enjoy all that heartfelt emotions, one needs to sit through a plethora of silly and over the top comedy scenes which today’s audience does not have time for. So, take things easy and watch the film when it is out online or on TV.