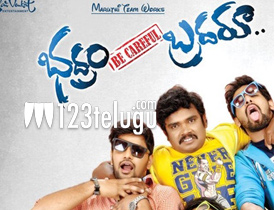 Starring Sampoornesh Babu in a special role, Bhadram Be Careful Brotheru showcases the story of a short filmmaker who aspires to direct a film, earn one crore and marry the girl he loves. The film released yesterday and let’s see how it fared.

Karthik (Charan Tej) is a shortfilm maker who aspires to become a feature film director. He falls in love with Shruti (Hameeda) but her father (Surya) refuses to get his daughter married to Karthik.

Karthik and Shruti plan to run away and tie the knot in a temple. However, Shruti’s dad botches the marriage and takes away his daughter. Shruti then manages to convince her dad to meet Karthik.

Shruti’s father challenges Karthik asking him to earn 1 crore in 6 months in order to marry his daughter. Karthik accepts the challenge and meets Sampoornesh Babu, an aspiring actor and convinces him to star in his film.

Will Karthik succeed in making the film and will he earn the challenged 1 crore needs to be seen on the big screen.

The only major plus point in this film is its engaging story. Charan Tej impresses with his performance and so are the actors who played his friends. Heroine Hameeda does a commendable job. Sampoornesh reprises himself and succeeds in entertaining his fans. Satyam Rajesh’s act entertains some what.

The film’s first half progresses with a good pace and a few small twists at regular intervals keep the proceedings interesting. Another plus point is the film’s short runtime.

After penning an interesting story, the director fails to come up with an engaging screenplay. The second half has a lackluster narration. After a decent first half, the second half sidetracks and is mostly centered around Sampoornesh Babu.

Sampoo’s kidnap scene and his spoofs imitating several stars ends up irritating the audience. Logic goes for a toss in certain scenes and the lack of emotional drama are some of the minuses in the film. There is no title justification in the film’s story.

All the technical departments excelled in their job. Director Rajesh Puli impresses in parts. Malhar Bhat Joshi’s cinematography is pretty decent and gives a rich look to this low budget movie. Editing is impressive in the first half, but disappoints in the latter half. JB’s songs are good, but his background score leaves a lot to be desired.

Bhadram Be Careful Brotheru is a result of the makers’ attempt to cash in on Sampoornesh’ craze. It may entertain those who love to watch films that are devoid of logic but for others they need to go in well prepared and ignore all the glitches that are thrown at you.