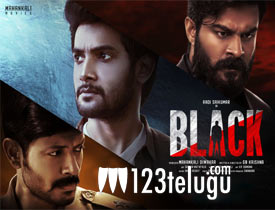 After F3, a small film named Black has hit the screens today. Aadi Sai Kumar plays the lead in this film which not many know released in the first place. Let’s see how it is.

Aditya(Aadi Sai Kumar) and Arjun(Aadi Sai Kumar) are two twins who hate each other. Upset with Aditya, Arjun leaves his house and goes far away. Time flies and Aditya becomes a cop. During one of his night duties, a robbery and murder happen, and Aditya is framed in the case. Aditya comes to know that none other than his brother Arjun has committed this crime and has pushed the blame on him. Who is the actual murderer? How will this murder case be solved? That forms the rest of the story.

Aadi Sai Kumar gets a tailor-made role and has done so well in it. Be it his dialogue delivery, and body language for both the characters, he has done quite well. Heroine Darshana was neat in her role and looked beautiful.

Bigg Boss fame Kaushal played a good role and his acting was effective. The twin brother track, their emotions, and characters linked to the twins have been designed well in the first half. The interval block and sleeping disorder is shown in the film have also been executed well.

The basic theme of the film had a lot of scope to elevate the proceedings but the director Krishna failed to utilize it. His screenplay is dull and the thrills needed for a crime thriller are completely missing in the film. More drama should have been created as to who is committing the murders but that did not happen.

The hero has a sleeping disorder and this aspect has so many issues. Also, this aspect is dragged way too much and this bores the audience completely. The director tried hard to elevate the suspense in the second half but failed to do so as the thrills showed do not engage at all.

The technical aspects of the film are pretty decent. Suresh Bobbili’s music is one of the main highlights of the film and his BGM also elevated a few scenes. The camera work by Satish was on par with any big film and showcased the visuals in a good light. Coming to the director Krishna, his story is good but his narration was below par.

On the whole, Black is a crime thriller that has a good story but is spoilt with uneven narration. Aadi Sai Kumar is sincere with his act but the proceedings are dull and do not create any impact on the audience leaving them disinterested.