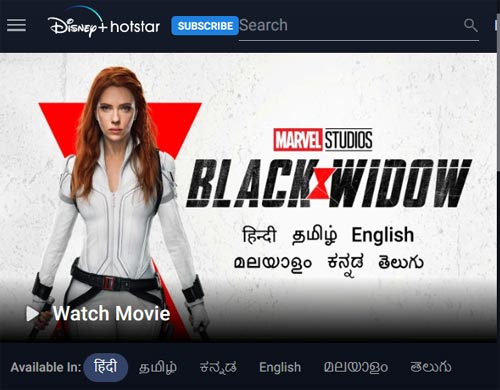 The latest outing from Marvel Cinematic Universe, Black Widow premiered on Disney Hotstar on the 3rd of September and is available for streaming in English, Hindi, Tamil, Telugu, Malayalam, and Kannada languages now. Here’s our review of the film.

Natasha Romanoff aka Black Widow is caught in a fatal conspiracy. She has to wage a lone battle against an opposing team of extremists who wish to see the end of her. Can the Black Widow make it out alive?

Scarlett Johansson shoulders the film with great conviction. Her splendid performance in this lady-oriented superhero movie is of elite quality.

This film unveils Black Widow’s journey ahead of her death in Avengers: Endgame. So, there is a hint of emotional angle attached to it. The fight sequences and the VFX works are of exquisite quality as well.

The biggest flaw of Black Widow is the incoherent screenplay. Majority of the scenes are set up for the action blocks that are to follow. The build-up scenes look forced.

The film is loaded with visually compelling action sequences but there is no emotional connect binding it all together.

Given the emotional depth that is associated with Black Widow character, one might expect a film, that is based entirely on her past would be fuelled by an engrossing story. But that isn’t to be. This film’s storyline is very shallow and it doesn’t have what it takes to keep the viewers guessing.

Cate Shortland has directed the film. While she manages to do justice to Black Widow’s superhero status, by loading the film with larger than life fight sequences, she leaves to emotional thread for a toss. The background score is of very fine quality and so is the cinematography. VFX and CGI works are splendid.

Black Widow is a poorly made film that doesn’t do full justice to the much-loved character. Scarlett’s performance is one of the few positives of this otherwise sub-par film.