OTT Review : Bombhaat – Silly and over the top 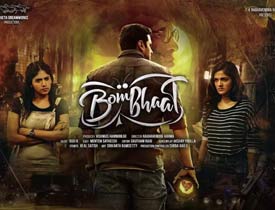 Continuing the trend of reviewing shows and films on OTT, today, a Telugu film called Bombhaat has hit the small screens. The film is available on Amazon Prime and let’s see how it is.

Vicky(Sushanth Reddy) is a guy who is always unlucky in life. He is friends with a scientist who suddenly goes missing and leaves his daughter Maya(Simran Chowdary) with him. The twist is the tale arises when Vicky comes to know that Maya is none other than a humanoid robot. This is also a time when yet another scientist(Makrand Deshpande) goes after Maya. Who is this Maya? Who created her? What is the whole science fiction angle in this film? To know the answers, you need to watch the film.

The music of the film is pretty good and all the songs are nicely placed. The main highlight of the film is Simran Chowdary. She gets a crucial role and is the best part in the film. She gets a neat screen space and the young actress holds the audience well with her looks.

There is absolutely no seriousness in the film as some key characters are out of sync and ham to another level. The screenplay goes for a toss as the scenes do not make any impression whatsoever right from the word go. One even wonders how Amazon Prime even bought this film.

The scientific angle is also dull and looks way too silly. There is no connection between scenes and the characters have no clarity in what they are doing. The hero’s role is made way too silly with all the bad luck factor which is not justified at all. Priyadarshi’s track has no meaning at all.

The last ten minutes where the hero creates some scientific devices to deal with the bad guys will suffocate you to another level. There is not one scene where the emotions click in the film and make things wayward and over the top for the audience.

Production values of the film are pretty decent as the camera work is good. The dialogues are decent and so was the VFX and production design. Lyrics of the songs are quite good and so were the thrills.

Coming to the director Raghavendra Varma, his story idea itself is weird and is not right on paper. The film has traces of Robot but has not been narrated well. The director’s inexperience is shown in many scenes as the emotions, characterizations, and logic go for a toss. He tried to give roles of many characters a twist but fails miserably.

On the whole, Bhombhaat is a scientific drama that fails to explode whatsoever. Except for the music and some action thrills of Simran Chowdary, the weird story, execution, and emotions do not click making this film an over-the-top and silly watch this weekend.