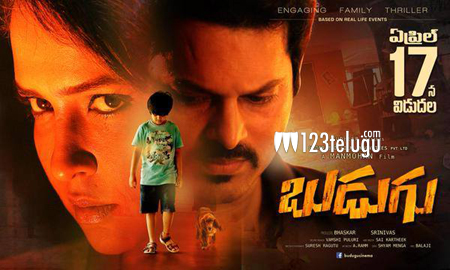 Talented actress Lakshmi Manchu has done some meaningful films in the past. She is back again with a physiological thriller titled Budugu ,which has hit the screens today. Let’s see how it is.

Pooja(Lakshmi Manchu) and Rahul(Sreedhar Rao) join their ten year old son Bunny(Prem Babu) in a boarding school. As time passes by, Bunny is kicked out of the school for his weird behaviour.

He returns back and continues to create havoc with his unique nature. A deeply upset Pooja takes him to a psychiatrist (Indraja) for treatment. After going through Bunny’s medical records, the doctor suggests a unique therapy. What is that therapy ? What problems does Bunny actually have ? Will he be cured ? That forms the rest of the story.

Major plus point of the film is the way the makers have showcased the way in which parents should treat their children in today’s age and time. The entire star cast has done a wonderful job and suit perfectly in their characters. Indraja is apt in a mature role and brings a twist to the film.

Lakshmi Manchu impresses yet again with a balanced act. Her performance especially in the thrilling moments is very good. Master Prem who did the main role is very good in his character. The way he showcases all his psychological problems is commendable. Sreedhar is good as a doting husband.

Interval block is pretty good and sets up the stage for a decent second half. Some horror sequences which are showcased in the second half are also impressive. First ten minutes of the film are quite racy and have been executed well.

Major drawback of the film is the basic execution. Even though the director has chosen a very interesting subject and premise, he could not narrate the film convincingly. Except for the first ten minutes and the interval block, there is nothing much happening in the first half. The story does not move ahead and all the scenes are dragged to the core.

Screenplay of this film is yet another drawback as major scenes are not elevated properly. Climax of the film lacks the necessary grip. All the scenes during this time look forced and do not convince the audience.

Editing of this film is pretty bad and does not go with the flow of the film. Budugu has many logical errors as many scenes have not been conceived properly.

Camera work of the film is pretty good and showcases all the scenes with the necessary effect. A said earlier, editing is quite bad. Sai Karthik’s music score is very good and elevates the film completely. His background score during the second half manages to impress big time. Coming to the director Manmohan, he has chosen an interesting point but could not communicate it properly. He has concentrated only on limited scenes and left the entire film on its own.

On the whole Budugu is good only in bits and pieces. Interesting concept, Lakshmi Manchu’s performance and some thrills in the second half are basic assets. On the flip side, lack of proper narration and a boring first half spoils the flow of this film. All those who like thrillers can try this film if you have nothing else to do. Rest can take it easy.